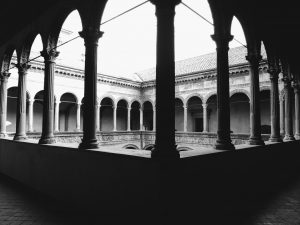 The Firm has its headquarters in Bologna in the historic Palazzo Bevilacqua.

Built in the heart of Bologna between 1477 and 1482 on commission of the jurist Niccolò Sanuti, and with great attention to detail by his wife Nicolosa, Palazzo Bevilacqua is one of the main examples of the Bolognese Renaissance.

The outside of the palace is characterized by the absence of a portico, a rather recurrent element in the Bolognese palaces of the time, replaced by the band of ashlars with rounded edges in grey sandstone of Porretta that runs along the entire ground floor.

Inside the palace has a beautiful courtyard decorated with terracotta Sperandio da Mantova and is characterized by two loggias whose columns are the work of Thomas Philip of Varignana.

In 1547, Pope Paul III had some sessions of the Council of Trent moved there for two years. At the turn of the twentieth century the palace was restored by Alfonso Rubbiani and the frieze that adorns the upper gallery was renovated by A. Casanova.